The 80’s was the decade of great Christian music.  Stryper led the way and several other bands followed.  Barren Cross, Bloodgood, Holy Soldier, and Guardian set a new direction and gave musical hope for a multitude of young people who grew tired of what passed for “music” in that generation.  One band that rose up during those formative years was Sacred Warrior.  What made this band special was their no-nonsense lyrics that confronted listeners with the biblical gospel.  They were never afraid of confronting sin and speaking plainly about the problem of evil.  SW eventually broke up and went their separate ways.

Almost thirty years later, Sacred Warrior has returned with a new lead singer and a fresh, updated sound.  Their new album, Waiting in Darkness has all of the features described above.  The only difference is this: The music is faster and the rock is heavier.  In fact, this is their heaviest album to date.  It should come as no surprise that this brain-rattling music is accompanied by the same non-compromising approach to the gospel.  Each song on the album is a testimony to the gospel of grace.

The album begins by addressing the problem of evil and the reality of redemption:

The title track, Waiting in Darkness is a heavy metal exposition of spiritual warfare:

In Dust and Ashes is a Job-like lament written in the first person that is sure to grip the attention of anyone who is enduring a dark night of the soul:

Fear Me is a bold declaration of the sovereignty of God.

I speak and the waves obey I am governed by none, sovereign over all  Wisdom begins and ends with me/All authority is mine and I’ll put an end to evil’s reign   For vengeance is mine says the lord/Fear me like you’d fear a raging fire/You’d never run into the flames/Respect keeps you from the pain/Or the ragin of the ocean/You’de never jump into the waves and sink to your grave

Fans of A.W. Pink will immediately wonder if the guys in Sacred Warrior have been meditating on the classic, The Sovereignty of God!

Long Live the King continues to confront the listener with the sovereignty of God over all things.

I hear the thunder I hear the call/The armies of his angels from the royal temple hall/One day is a thousand years, still he’s drawing nigh/Lift up your voice unto the sky/shout the battle cry

Jealous Love is a ballad that glories in the Cross of Christ. 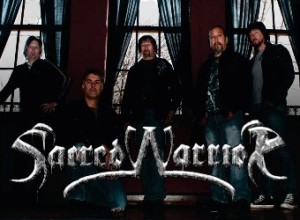 Day of the Lord is the token eschatological metal anthem and is rerecorded from their first studio album, Rebellion.  This one is a real blast from the past!  This is the kind of music that put Sacred Warrior on the map.

Fans of Sacred Warrior will only be encouraged by their latest record.  The music is tight, sounds current, best of all – exalts the Lord Jesus Christ!