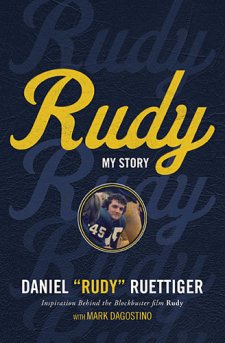 I’ll never forget the first time I saw the movie, Rudy in 1993.  It stands among my favorite sports movies alongside Hoosiers, Miracle, The Rookie, and Rocky.

Rudy: My Story by Daniel “Rudy” Ruettiger is the real life story behind the film.  Ruettiger tells the tale that a two-hour movie could never tell.  He includes the heartbreaking stories of teachers who belittled him and businessmen who betrayed him.  Most important, the author chronicles the details that led him to the final twenty-seven second on the famed field in South Bend, Illinois.

The book is filled with inspiring stories and will undoubtedly lead many readers to new heights and the achievement of new goals.   As one might expect, Ruettiger’s work is loaded with antidotes that motivate and encourage.  But an unexpected twist occurs nears the end of this book.  The author is candid about his failures which occurs many years after his success on the football field.  The surprise ending is actually the most important part of the book.  Ruettiger not only spurs readers to achieve their dreams; he encourages them to persevere even in the face of failure.

It has been well over thirty years since Rudy sacked the quarterback in the final seconds of his senior year.  But readers who listen carefully, can hear the roar of the crowd, “Ru-dy, Ru-dy, Ru-dy!”

I received this book free from the publisher through the BookSneeze®.com  book review bloggers program. I was not required to write a positive review.