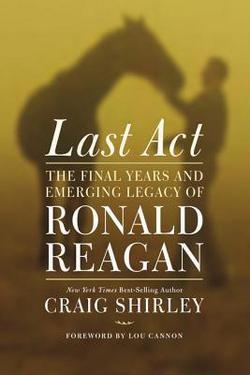 The legacy of President Ronald Reagan is securely established in history. Liberals can scoff and moan but the fact remains; Ronald Wilson Reagan is one of the most influential Americans of all time. Indeed, Reagan is not only one of the loved and respected presidents in American history; he is also one of the most effective.

Most books focus on the life of President Reagan and work hard to establish his presidential accomplishments. Craig Shirley’s new masterpiece, Last Act: The Final Years and Emerging Legacy of Ronald Reagan takes a different approach. Shirley sets out to help readers see Reagan in a different light and in a different context. This book serves as a lens for Americans to view President Reagan in his post-presidential days, including the days which followed his diagnosis of Alzheimer’s disease.

Last Act begins with President Reagan on his death bed. The author highlights Reagan’s life and legacy from different perspectives – including friends, family, and foes. One of the constant themes that weaves through the book is the deep and abiding love that America has for the 40th president of the United States.

We would do well to listen to the words of Reagan’s old arch nemesis, Senator Ted Kennedy who offered these fitting words, upon hearing of Reagan’s death:

Last Act: The Final Years and Emerging Legacy of Ronald Reagan bears the marks of a book which is informed by thorough research and careful study. Craig Shirley should be commended for his clear writing and respect for the 40th president of the United States. Last Act is not only a tribute to one of the most beloved leaders in American history; it is a gift to the American people.

I received this book free from the publisher.   I was not required to write a positive review.