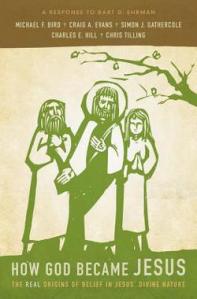 Bart Ehrman is the James A. Gray Distinguished Professor at the University of North Carolina at Chapel Hill.  His Christological musings have caught the attention of scholars and pastors alike as he repudiates much of what passes for conservative scholarship.

The authors of How God Became Jesus respond critically to his Ehrman’s primary assertions, some of which are noted above. Frankly, How God Became Jesus contains a wealth of apologetic material in the title alone.  The title itself runs contrary to Ehrman’s latest work, How Jesus Became God.

Michael Bird, Chris Tilling, Craig Evans, Simon Gathercole, and Charles Hill gather forces to respond critically to Ehrman’s arguments.  The writing is scholarly and offers a rather systematic response to Ehrman.  Readers can decide for themselves if the authors are successful.  In mind, they do succeed, although not without some concern.  There is a degree of sarcasm that surfaces in some of these responses, which in the final analysis does not pay proper honor to their opponent.  I would prefer that the responses were informed by Paul’s words to Timothy – “And the Lord’s servant must not be quarrelsome, but kind to everyone, able to teach, patiently enduring evil, correcting his opponents with gentleness” (2 Timothy 2:24-25, ESV).

I received this book free from the publisher through the BookSneeze®.com  book review bloggers program. I was not required to write a positive review.