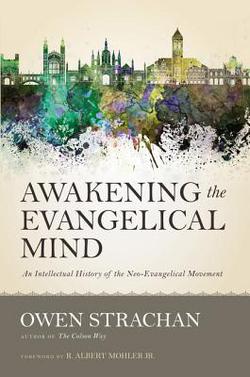 In the late 1940’s, V.W. Steele resigned as the Senior pastor at Bethel Baptist in Everett, Washington. He stepped away from his pulpit at the height of a revival as he felt prompted by God to move to another ministry. He loaded up the car with his young family made the long journey to Los Angeles. Providentially, he was commissioned by Charles Fuller to partner together and preach the gospel in Idaho, Montana and North Dakota. Pastor Steele was my grandfather, so I have a particular interest in his venture with Charles Fuller, the popular preacher on the Old Fashioned Revival Hour radio broadcast.

My grandfather pastored churches in a day where the battle lines were drawn. He lived in a day when men were willing to lose life and limb for the sake of doctrinal convictions. But he also lived in a day when the church was in a titanic struggle against the cultural monster of modernism.

Dr. Owen Strachan’s book, Awakening the Evangelical Mind provides an invaluable service for the church as he explores where the battle lines were drawn and introduces readers to the key players. These neo-evangelicals, including Harold Ockenga, Carl Henry, Billy Graham, and others helped establish the Christian mind in a culture awash in a sea of modernism.

Strachan traces the evangelical trajectory of these seminal thinkers by guiding readers through key historical turning points and decisions that were decisive for the establishment of the Christian mind in America. The author demonstrates how select Christian colleges and Seminaries were launched and the men who envisioned them. These are important historical details that the author skillfully tells; stories that have either been forgotten or worse yet, never heard!

R.C. Sproul and Mark Noll have both lamented about the decline of the Christian mind. Strachan’s excellent work is a much-needed corrective and salve for the soul. Strachan is eager to prop up the long history of the evangelical mind and optimistic about its future: “If the evangelical mind is not always appreciated, this simply cannot be because it does not exist. It does exist, and its contributions over two millennia are monumental.”

The author argues that evangelicals face some important decisions in the days ahead:

The church faces a profound choice: it can retreat and huddle, nursing its wounds as it accepts its intellectual marginalization. Or, it can learn once more from Ockenga, Henry, Graham, and the Cambridge evangelicals, and promote outstanding education that not only engages the questing heart but freshly awakens the evangelical mind.

Awakening the Evangelical Mind is a call to the next generation of Christian leaders to lead with biblical conviction and bold courage; to continue the legacy that was established by some great men of the faith.