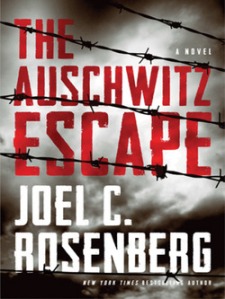 Razor-wire fences. Vicious dogs.  Soot filled chimneys.  Gas chambers.  Piles of rotting corpses.  The stench of human flesh.  These are only a few of the images that make up one of the many death camps devised by the Nazi’s during World War II.

Joel Rosenberg offers readers with his first attempt at a work of historical fiction; a novel which tracks Jacob Weisz, a young Jewish man from Berlin.  Weisz is captured in a failed attempt to liberate a train heading for Auschwitz.

While Weisz endures the hellish confines of Auschwitz, he also develops close friendships with several people; a twist that offers hope in the midst of adversity.  The title gives away the main plot line which leads Weisz away from Auschwitz.  But his escape is not self-focused.  Rather, his departure is for a greater purpose – the liberation of masses in the death camp.

Once again, Rosenberg pens another award-winning novel; a novel that is filled with pain and realism, interesting characters, and historical tidbits that will lure many readers to the primary sources for more information.  The author directly confronts the problem of evil and presents hope that is grounded in the biblical worldview and centered on the cross of Christ.