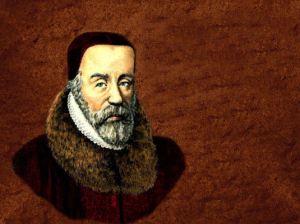 William Tyndale was born in 1494.  He attended Oxford, Magdalen Hall and Cambridge University.  A student and adherent of the Protestant Reformation, Tyndale engaged in numerous debates with Roman Catholics.    One leader in the Roman Catholic church mocked Tyndale: “We are better to be without God’s laws than the Pope.”  Tyndale, never one to mince words replied, “I defy the Pope and all his laws.  If God spare my life ere many years, I will cause the boy who drives the plow to know more of the Scriptures than you.”

Tyndale was a confident, bold, and fearless theologian and scholar who translated the Bible into an early form of Modern English, likely with Luther’s help in Wittenberg.  But Tyndale was arrested and imprisoned for 500 days in a kangaroo court, and ultimately convicted.  He was sent to be strangled and burn at the stake in the prison yard on October 6, 1536 – the same year that Calvin published the first edition of The Institutes of the Christian Religion.  His last words were, “Lord, open the king of England’s eyes.”