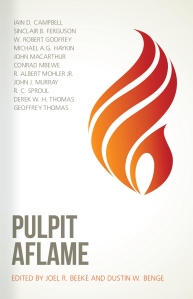 In 2007, I listened to Dr. Steve J. Lawson preach for the first time at the Shepherds’ Conference (Grace Community Church). The title of the sermon was Bring the Book, an exposition of Nehemiah 8:1-8. I remember being mesmerized by Lawson’s authority, passion, and his ability to handle the Word of God. The pulpit presence of Lawson riveted my attention on the text and rallied my affections around the great theme of God’s glory. Later in the day, I listened to Lawson explore the contours of George Whitfield’s life and ministry.

The following day, Lawson joined John MacArthur and several other pastors for an extended Q & A session. Pastor John asked Steve Lawson to share about his departure from Dauphin Way Baptist Church in Mobile, Alabama. I vividly remember tears welling up in my eyes as Lawson recounted the animosity he experienced when he preached about the doctrines of grace. I too, experienced similar opposition. Eventually, Lawson resigned and move on to plant Christ Fellowship Baptist Church.

I have since listened to hundreds of sermons by Steven Lawson and have poured over his books and articles that address pulpit ministry and Reformed theology. While many have influenced my preaching ministry, no living person has influenced me more than Dr. Steven J. Lawson.
Numerous expositors have been influenced by Lawson’s ministry. Pulpit Aflame is a fitting tribute to a man who has given his life to preaching the gospel of Christ and training men to do the same. The book is edited by Joel Beeke and Dustin Benge. Thirteen fellow expositors offer contributes in this volume that focuses on the preaching task.

The book is arranged in three parts including the mandate of preaching, the meaning of preaching, and the motivation of preaching. Authors include the likes of Al Mohler, John MacArthur, R.C. Sproul, and Sinclair Ferguson. Each contributor sets forth a particular aspect of preaching which magnifies the great God of the universe. Each contributor expresses deep admiration and respect for Steven Lawson.
I highly commend Pulpit Aflame. I recommend that preachers pour over these pages and find confirmation in the important task before them.

May these essays challenge, comfort, and confront a new generation of preachers who are committed to wielding the mighty Sword so that nations would find their joy in Christ. May pulpits around the world catch fire as they follow the example of Dr. Steven J. Lawson.