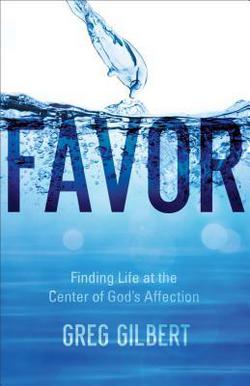 The prosperity gospel has been an influential force within the ranks of evangelicalism for some time. This God-dishonoring approach to the Christian life misinterprets Scripture and misrepresents the gospel. Tragically, many people are led astray by the idea that God’s gifts may be earned and that financial remuneration is at the center of God’s kingdom.

Greg Gilbert’s book, Favor: Finding Life at the Center of God’s Affection takes a different approach, one that is steeped in Scripture and offers people an eternal hope.

Part One: The Favor of God and How to Get It

Part one lays the theological foundation. The author defines his terms clearly by describing the essence of favor which means that you please someone or bring them joy or gladness. Therefore, “to be favored by God,” writes Gilbert, “is to be pleasing to him, to bring him joy … This is not a question of whether you’ll live your best life now; it’s a matter of whether you’ll live at all.”

The author wrestles with the idea of “earned favor.” In other words, humans have a built-in propensity to earn what they receive. For example, a worker receives wages for his hard work. A student receives a diploma for diligent study.

At the core of this study is the reality that most people are unwilling to admit: They do not deserve the favor of God. “You deserve to be condemned, to die, and to spend eternity under God’s wrath …” Gilbert writes. When creatures fail to glorify the living God, they commit cosmic treason against the throne of heaven. Gilbert adds, “It is rebellion and insurrection against the throne and crown and authority of God.”

But the fact that Jesus died, the fact that the One who actually earned life submitted to death, tells us that something more was happening. And that something more is the whole glory and joy of the Christian gospel. When Jesus won the favor of God and all its rewards, he wasn’t doing it just for himself. He was doing it for others too. He was acting as a representative, a substitute, a champion.

Gilbert’s winsome presentation of penal substitutionary atonement is stunning, to say the least. This breathtaking portrayal of the atonement leads to an important discussion that concerns union with Christ, a doctrine that is underemphasized in many churches. Gilbert goes so far to say, “Union with Christ … is the most under-appreciated, underemphasized, and overlooked doctrine in all of Christian theology.” Gilbert does his part to put a proper biblical emphasis on this crucial doctrine.

Part two focuses on the blessings of God’s favor by alerting readers to four important topics, namely, the blessing of contentment, peace with God, new life, and fighting as favored sons and daughters in the kingdom. These blessings are obviously practical and multi-faceted. Gilbert does a good job linking these blessings to real-life examples. But more importantly, he shows where these blessings appear in the Bible.

Favor: Finding Life at the Center of God’s Affection is perfect for new believers but will also benefit seasoned Christians as well. It wonderfully articulates the gospel and causes readers to rejoice in the blessings which are theirs in Christ!