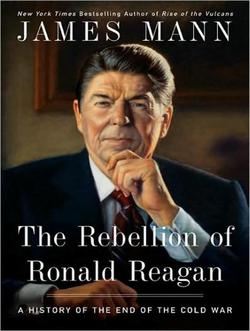 James Mann’s, The Rebellion of Ronald Reagan is a fascinating and readable account of the days leading up to the end of the Cold War.  Mann clearly describes the inner workings of the Reagan administration and the resistance from liberals and conservatives alike to the president’s approach and methodology.

The Rebellion of Ronald Reagan relentlessly presents the former president’s love for freedom and his passion to eliminate totalitarianism.   I was reminded of Reagan’s love for freedom in 2005 as I stood on a bridge that spans the Moscow river.  As I gazed at the Kremlin and reflected on the new found and relative freedom the citizens of Russia enjoy, I glanced at the”Goon-inspired” graffiti that was etched onto the bridge. 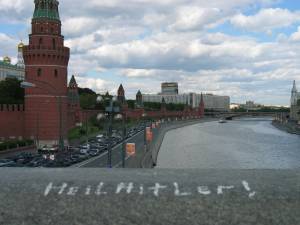 The words, “Heil Hitler” were mindlessly inscribed on the edge of the bridge.  The graffiti reminded me that freedom will be short-lived if liberated people grow apathetic and fail to guard their freedom.  It reminded me that fascism is still visible in the rearview mirror, not to mention the horizon.   And it reminded me that Marxism still has momentum and must be stopped at every juncture.  Liberated people everywhere would do well to seriously consider the warning of Thomas Jefferson: “When the people fear their government, there is tyranny; when the government fears the people, there is liberty.”

President Reagan was acutely aware of these concerns which helped fuel the fire of his policies and interactions with Gorbechev. The Rebellion of Ronald Reagan is a helpful reminder of events in the distant past.  While the Cold War is over, the ideology that inspired Lenin, Stalin, and Hitler is still very much alive. Ronald Reagan reminds us of the importance opposing the enemies of freedom; he reminds us to stand on the watchtower and jealously guard our freedom.  He reminds us that freedom is not free; it is a precious commodity worth dying for.  And he reminds us that freedom is never guaranteed in the future.

Reagan was aware of the protesters that gathered to voice their complaints about his appearance at the Brandenburg Gate.  His speech closes: “And I would like, before I close to say one word.  I have read, and I have been questioned since I’ve been here about certain demonstrations against my coming.  And I would like to say just one thing, and to those who demonstrate so.  I wonder if they have ever asked themselves that if they should have the kind of government they apparently seek, no one would ever be able to do what they’re doing again.  Thank you and God bless you all.”

President Reagan is no longer with us but the Reagan revolution is still alive and well; much to the chagrin of the liberal elite and secular progressives.  Big government, nationalized health care, excessive taxation, a reduction in personal liberty, and a weakened national defense was never tolerated by Reagan.  And the current progressive agenda which is aggressively promoted by the Democrats in Congress will not be tolerated by the American people.