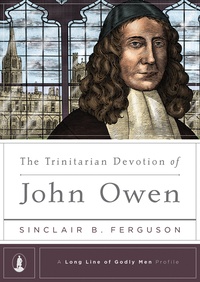 The Trinitarian Devotion of John Owen by Dr. Sinclair Ferguson is the latest installment in the Long Line of Godly Men Profile Series, edited by Dr. Steven Lawson.  Ferguson presents a readable introduction to the most well-known Puritan, John Owen.

The book includes five chapters which overview Owen’s life and theological commitments.  Chapter one focuses on his life as a pastor and theologian.  Owen’s upbringing is discussed and his pastoral experience is surveyed.  Additionally, the author touches on Owen’s tenure as vice-chancellor at Oxford University.

The remaining chapters overview Owen’s theological framework which focuses more narrowly on his robust doctrine of the Trinity.  Sinclair Ferguson carefully summarizes Owen’s pursuit of the God in all his glory as expressed in the three persons – Father, Son, and Spirit.  Ferguson adds, “To become a Christian believer is to be brought into a reality far grander than anything we could ever have imagined.  It means communion with the triune God.”  The author demonstrates how Owen regarded the Trinity as a chief cornerstone of the Christian faith.  Numerous primary sources are cited and explained.  In addition, Dr. Ferguson provides helpful analysis along the way.  He beautifully captures the essence of John Owen’s devotion to the Trinity.

The Trinitarian Devotion of John Owen is a perfect introduction for the beginning student of the Puritan divine.  But this work is also suitable for veteran students of Owen as well.  Ferguson bring his typical scholarly approach to the table but writes with the heart of a pastor/shepherd.  This work should help revive further interest in Puritanical studies and is a welcome guest at the table of these godly men.  My hope is that Ferguson’s work will catapult readers to Owen primary sources – a practice which is certain to encourage, edify, and equip a new generation of Christians.

I received this book free from the publisher in exchange for an honest review.  I was not required to write a positive review.